Why did you get in Excel hell

The first thing that anyone needs to understand when they want to get rid of Excel, is that Excel is a solution, not a problem. Someone has made the Excel workbook to address a problem that could not be solved with the current system landscape offered by IT. This could be triggered by employees that do not know their way around the current system, even though the system is perfectly able to do it. It could be a new process which the current system simply isn’t ready for. It could be that the data in the current systems is incorrect but correcting it in those systems takes too much time/effort.

It all boils down to people, processes, data, and technology. These areas are well known by most consultants and there are many ways of displaying the image below, but as this article has a focus on technology, we display it with technology up front. 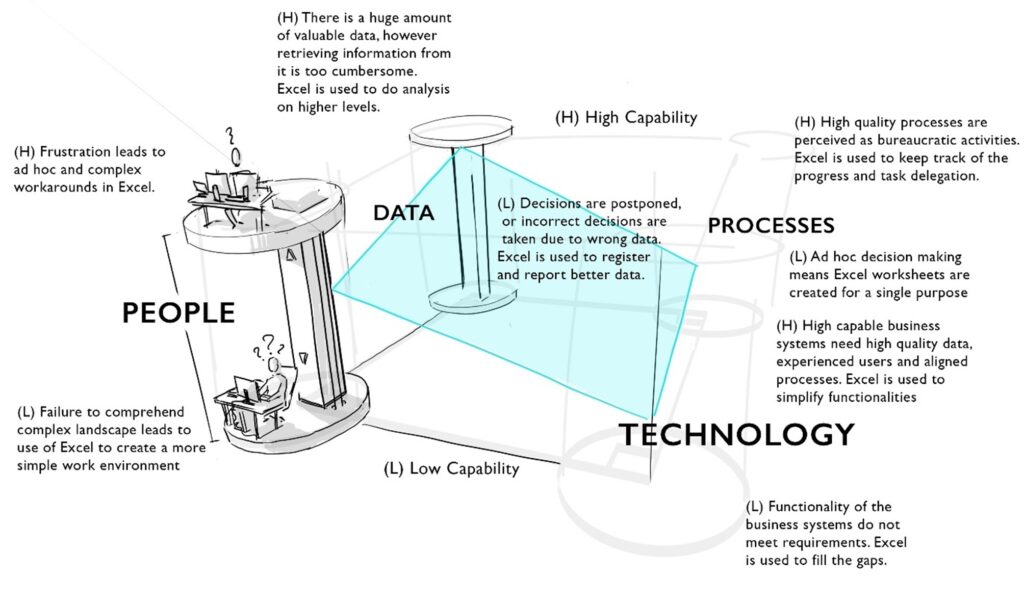 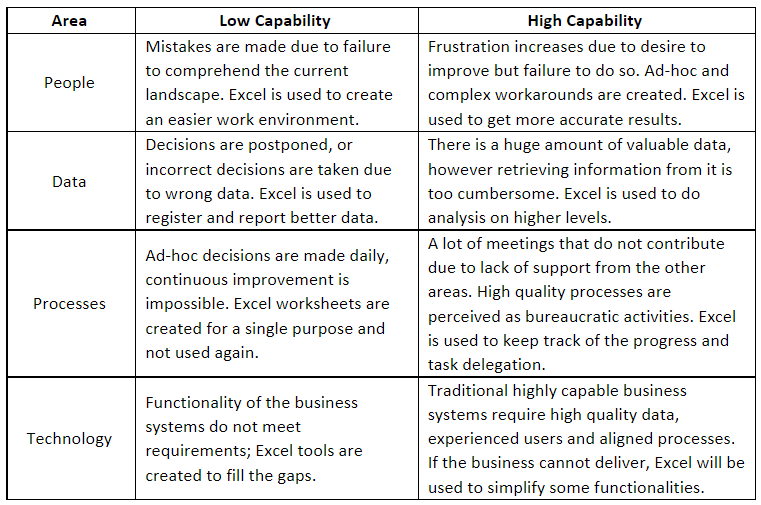 So why does Excel succeed where other technologies fail? It is because the (experienced) user can create new functionality, instantly. The functionality will always fit the user requirements, the user can incrementally increase functionality according to his proficiency, the solution can be adjusted for process changes and the data being used is easily decided by the user. Because the user is in full control; the technology is always on the same level as the processes, the people, and the data.

That sounds quite good right? Then why do companies hate Excel? The biggest problem is the lack of a single common source of truth. People tend to have different numbers for the same thing, which leaves them to discuss the value instead of the story behind the value. It will keep people from making decisions or worse, making the wrong decision. There are many reasons why this issue and others arise; We won’t dedicate an entire article on them, as you probably know most of them already. We simply mention them and if you have questions, you can reach us.

Compared to dedicated systems, the above issues are a heavy cost for the flexibility Excel has to offer. The next blog post, part 2, explains the pillars in more detail and why they are important! Part 3 will focus on tools to use instead, without losing the flexibility desperately needed by most companies.

We thank Flatland for designing the image to fit this story.

We use cookies to ensure that we give you the best experience on our website. If you continue to use this site we will assume that you are happy with it.
Cookie SettingsAccept All
Manage consent

This website uses cookies to improve your experience while you navigate through the website. Out of these, the cookies that are categorized as necessary are stored on your browser as they are essential for the working of basic functionalities of the website. We also use third-party cookies that help us analyze and understand how you use this website. These cookies will be stored in your browser only with your consent. You also have the option to opt-out of these cookies. But opting out of some of these cookies may affect your browsing experience.
Necessary Always Enabled
Necessary cookies are absolutely essential for the website to function properly. These cookies ensure basic functionalities and security features of the website, anonymously.
Functional
Functional cookies help to perform certain functionalities like sharing the content of the website on social media platforms, collect feedbacks, and other third-party features.
Performance
Performance cookies are used to understand and analyze the key performance indexes of the website which helps in delivering a better user experience for the visitors.
Analytics
Analytical cookies are used to understand how visitors interact with the website. These cookies help provide information on metrics the number of visitors, bounce rate, traffic source, etc.
Advertisement
Advertisement cookies are used to provide visitors with relevant ads and marketing campaigns. These cookies track visitors across websites and collect information to provide customized ads.
Others
Other uncategorized cookies are those that are being analyzed and have not been classified into a category as yet.
SAVE & ACCEPT
X